A 1967 Secret Project That Could Have Stolen Pakistan’s Rains 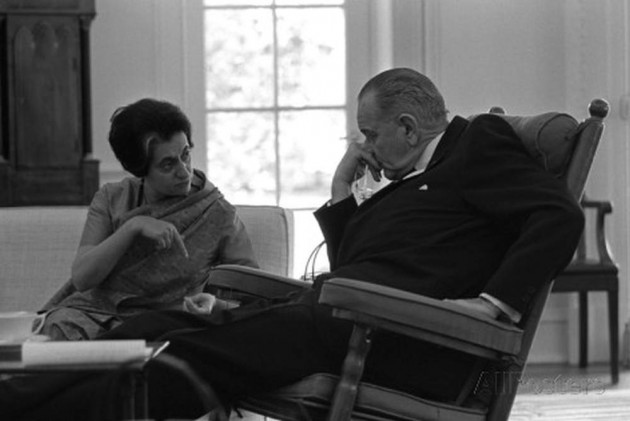 On a cloudless early morning in January 1967, a large unmarked US military plane, with strange-looking tanks under its wings, landed outside Delhi. Its mission was among the strangest ever attempted by a foreign power on Indian soil – or rather, under Indian skies.

The failures of the monsoons of 1965 and 1966 had hit the country hard. The poorest states suffered the most, especially Bihar where the failure of the rice crop led to near-famine- like conditions. India was on its knees, desperate for grain; the government of Indira Gandhi was almost completely dependent on US food shipments under Public Law 480.

It was a situation that US President Lyndon Johnson was determined to exploit. Johnson was a complex man and his decisions were often driven by multiple factors. Caught up in the maelstrom of the Vietnam War, he saw India as a possible bulwark against the advance of communism in Asia, but it was not an ally in the way Pakistan was. So he micromanaged grain shipments, sending just enough and that too barely in time. Gandhi and her advisers were humiliated at having to listen to the US government lecture on much-needed agricultural reform.

Johnson was also a great believer in science and technology as a solution to the world’s most pressing issues. And in a top-secret defence project of the US military, he thought he had found the answer to the spectre of mass starvation.

But it was not altogether altruism that drove him. During much of 1965 and 1966, the United States was engaged in a highly classified effort to modify the weather over Vietnam. Codenamed Operation Popeye, the idea was to enhance rainfall over the Ho Chi Minh Trail passing through Laos and into South Vietnam, thereby extending the wet season and impeding movement of Viet Cong guerrillas. The technique involved seeding high altitude clouds with silver iodide which coalesced the moisture and induced it to fall as rain.

The US Secretary of Defence Robert McNamara now proposed to try this in the skies over Bihar and Uttar Pradesh. If it worked, it would place the Indians in perennial debt to the United States, apart from helping avert a serious humanitarian crisis.

From a military viewpoint, the experimental data from weather modification in India would also prove very useful to Project Popeye.

Weather modification was at the time illegal in the US, and there were reasons to suspect that India was being used as an experiment. However, steady diplomatic pressure and India’s own desperate need to find a solution to the food problem prevailed.

And so began one of the most secretive and strange collaborations ever between the governments of the US and India. Indira Gandhi was paranoid that this not be seen as a joint military project and also did not wish to raise the hopes of her countrymen without adequate evidence that the technique would work.

Codenamed Project GROMET, a joint task force started its activity in early 1967. A hurdle presented itself almost instantly: not a cloud was to be seen in the skies over the target states. Without a cloud presence, the technique would not work. However, some cloud formations were reported over Punjab, close to the Pakistan border. India and Pakistan had fought a seventeen-day war less than two years ago – in 1965, and given the fraught relations between the two countries, it was impossible to conduct such a dangerous experiment close to Pakistan without informing that nation.

GROMET remained in a state of sporadic activity through the months January to April, 1967. Then the decision loomed: should it be launched to take advantage of the monsoonal clouds that would soon appear? Not to do so would place the entire project in jeopardy. On the other hand, there was a serious complication. As the south-west monsoon sweeps over the Indian sub-continent, it curves over India and then into Pakistan. If GROMET seeded the rain clouds over India and caused all the water to fall on the Indian land mass, then what would be left for Pakistan?

‘With Pakistan’s ‘almost psychotic fear of India, it would not be a good idea for Pakistani leaders to become convinced that India was trying to steal its water.’

Combined with other potential technical, legal and moral hazards of maintaining secrecy on a project with such extreme ramifications, GROMET floundered.
Yet as late as June 1967, Johnson’s science advisor Donald Hornig informed the President ‘that a team sponsored by USAID was heading to India to set up a permanent weather modification programme despite potential legal and international complications.’

After that there was silence. The administration files of the period say nothing further of Project GROMET. India had an abundant monsoon that summer of 1967 and the country was saved for the time being. It seems likely that GROMET was quietly withdrawn. However, Project POPEYE actively engaged in weather modification over Laos from 1967 through to 1972 – with results that are unclear even today.

As India, China and Pakistan jostle with each other over stated and unstated rights over terrestrial waters – the Indus and the Brahmaputra, the reader will sense an eerie resonance with the events of 1967, when a secret project might well have led to a face off – this time over waters from the skies.